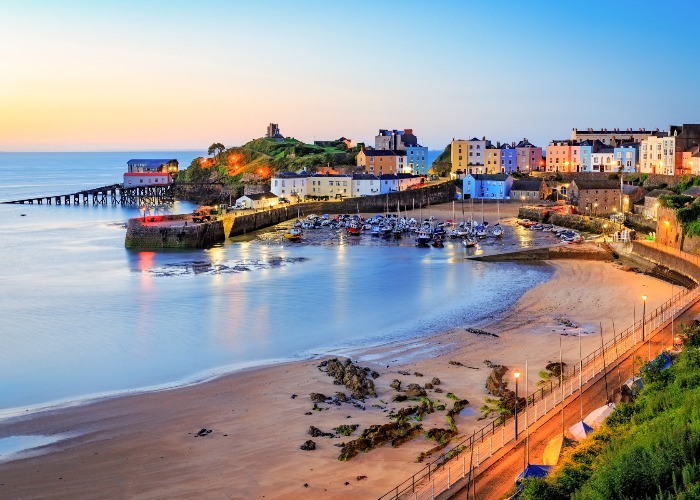 5 things to do in Tenby – the colourful Welsh icon

Laze on one of the beautiful beaches that surround the town or wander along the harbour buzzing with fishing village life the tenby beach. Visit a fort only reachable at low tide, or head out for adventures on the ocean.

Outside the town, discover the beauty of the area on the Pembrokeshire Coast Path. Visit quaint country pubs, explore stunning natural scenery, and try some of the best surf in the country.

THINGS TO DO IN TENBY

You could easily spend a weekend in Tenby and be content with all the town has to offer. Relax on sandy beaches, wander narrow streets to explore independent shops or hit the water for an aquatic adventure in one of the best places to visit in the UK.

Tenby is surrounded by a magnificent sweep of golden beaches. Except for St Ives, I can’t think of another UK town so blessed with glorious beaches right on its doorstep.

North Beach is one of the most photographed in the country. Sheltered on three sides, it’s a tranquil beach which is perfect for families. There are toilets and cafes on the promenade above the beach, and deckchairs, canoes and boats can be hired for the day.

On the other side of town, Tenby South Beach has a different feel. A mile and a half long and backed by dunes, it is slightly wilder and more rugged. As the tide retreats, a large shelving beach is revealed.

Tenby Castle is perched on a promontory between the two beaches of the town. It was built in the 12th century by the Normans and was regularly attacked, sacked, and captured over the next 100 years. The town walls were added in the 13th century and the moat was widened in the 15thcentury.

Today the remains consist of a partial gateway, a small tower on the summit of the promontory and extensive walls on the eastern side. But the real joy of visiting Tenby Castle is walking around the promontory taking in the beautiful setting. The views along the coast and down to castle beach are lovely.

3 – JOIN THE MONKS ON CALDEY ISLAND

One trip that’s definitely worth considering is the boat trip to Caldey Island. Not only is it home to seals and birdlife, but also to a group of Cistercian monks. For a thousand years the monks have been praying and living in tranquillity on these distant shores.

The island is packed with oddities making it a wonderful thing to do in Tenby. Explore the old priory, the lighthouse, the grand whitewashed abbey, and the nearby church. To unwind, the gardens and beaches are lovely.

The monks provide free tours, but if you want to support them then pick up their locally made Caldey perfume or Abbot’s Kitchen chocolate.

Boats run every twenty to thirty minutes every day (except Sunday) from May to September. Pick up your tickets at the Caldey Island Kiosk on Tenby Harbour. The crossing takes 20 minutes, but you could easily spend a good few hours on the island to see everything.

Although popular for the colourful row of houses on the front, Tenby harbour retains a working fishing village feel. Old brick sea walls surround fishing boats delivering the day’s catch, and tourist boats waiting to take people out to sea. It’s not the prettiest part of Tenby, but it buzzes with action, especially in the morning.

Sea-bound tours leave from the Tenby harbour. Join a local fishing trip to catch mackerel, or head out on a sunset cruise to enjoy the coastal scenery. Wildlife tours provide the opportunity to spot puffins, razorbills, gannets, and the occasional seal.

Try Stowaway Coffee Co. under the arches of the harbour. They do a great coffee and a few morsels to eat as well. The star, however, is the delicious Mary’s Farmhouse ice cream.

5 – MEANDER THE STREETS OF TENBY

Tenby is a maze of roads meandering past lovely pastel-coloured houses. It won’t take long to walk almost every street in the old Georgian town centre but make sure you see the highlights.

The Tudor Merchant’s House has been a fixture of Tenby for over 500 years.

There is a well-preserved section stretching from White Lion Street along South Parade to South Florence Parade. But the most dramatic sight is the Five Arches Gate, which was once the entrance to the town.

To get the best view of the town head north up The Croft and slowly ascend to the cliffs above the northern end of North Beach. The vista back over the beach to the pastel-coloured houses rising above the harbour is (just about) reminiscent of the Amalfi Coast.