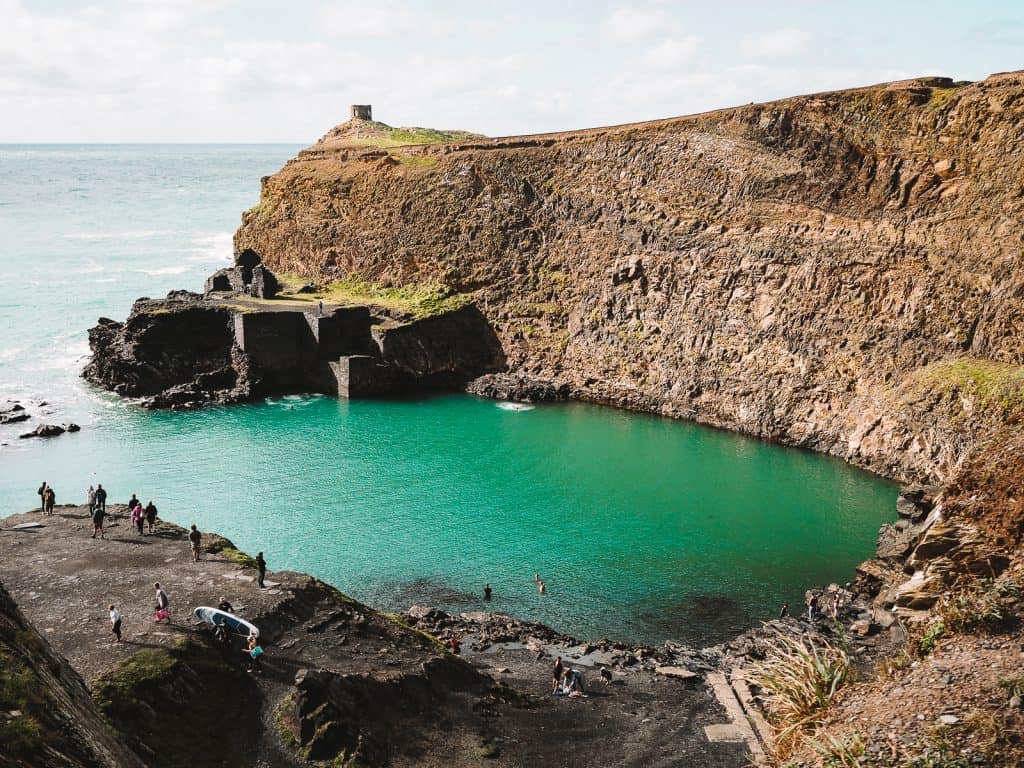 How to Visit the Magical Blue Lagoon in Pembrokeshire, Wales

Hidden away on the Welsh coastline is the spectacular blue lagoon wales in Pembrokeshire, Wales. Located on the site of the abandoned Abereiddy Quarry, it’s now a peaceful oasis that you can visit on the cliffside.

Although it’s in a remote location and the drive to get here isn’t ideal, once you arrive you will be blown away by its sparkling azure waters! It’s a must visit if you’re in the St David’s peninsula and a highlight of any Welsh road trip.

Here’s a complete guide on how to visit the Blue Lagoon in Pembrokeshire or Morlyn Glas.

What is the Blue Lagoon in Pembrokeshire?

The Blue Lagoon is the result of a flooded sea quarry in the hamlet of Abereiddy in Wales. It lies off the Pembrokeshire coastline and the contrast between this grey rural beach and vibrant waters is quite unique to the area.

Although it has the name Blue Lagoon, the colour of the water actually has a greenish hue to it! Today, the lagoon is a popular tourist attraction and is a famous location for water sports.

The history of Abereiddy Quarry and the Blue Lagoon in Wales

Pembrokeshire was a leading area for the slate industry in Wales. It’s estimated that there were over 100 quarries in the area at its peak. The ‘Blue Lagoon’ is a ruin of the St Brides Slate Quarry in Abereiddy that was established in the 19th century. Similar to the quarry of Porthgain, it was in use from the 1840s to the 1890s.

Back then, this quarry was linked to Porthgain by a tramway that was worked by horses. They would transport the slate that was extracted here by cart! The slate would then be shipped out from Porthgain. At some point during its use, parts of the quarry were blasted away. It was a request from the local fisherman as they wanted a narrow channel to access the lagoon to shelter their boats.

The quarry was purposefully flooded and much of the stone on the cliffside fell into the sea. It’s the sediment from the slate stone that turned the water blue and created the name ‘Blue Lagoon’. By 1910, Abereiddy Quarry was out of use, and the area was completely abandoned. The quarry buildings and workmen’s cottages later fell into disrepair.

Where is the Blue Lagoon in Wales?

The Blue Lagoon can be found in the county of Pembrokeshire in South Wales. located near a hamlet called Abereiddy. It’s located on the North Coast of the St David’s Peninsula and is around 5 miles from the tiny cathedral city of St David’s itself.

It’s also in the middle of Whitesands Bay and Strumble Head Lighthouse. So, it makes a great pitstop on a road trip or a place to break up your Pembrokeshire coast walk.