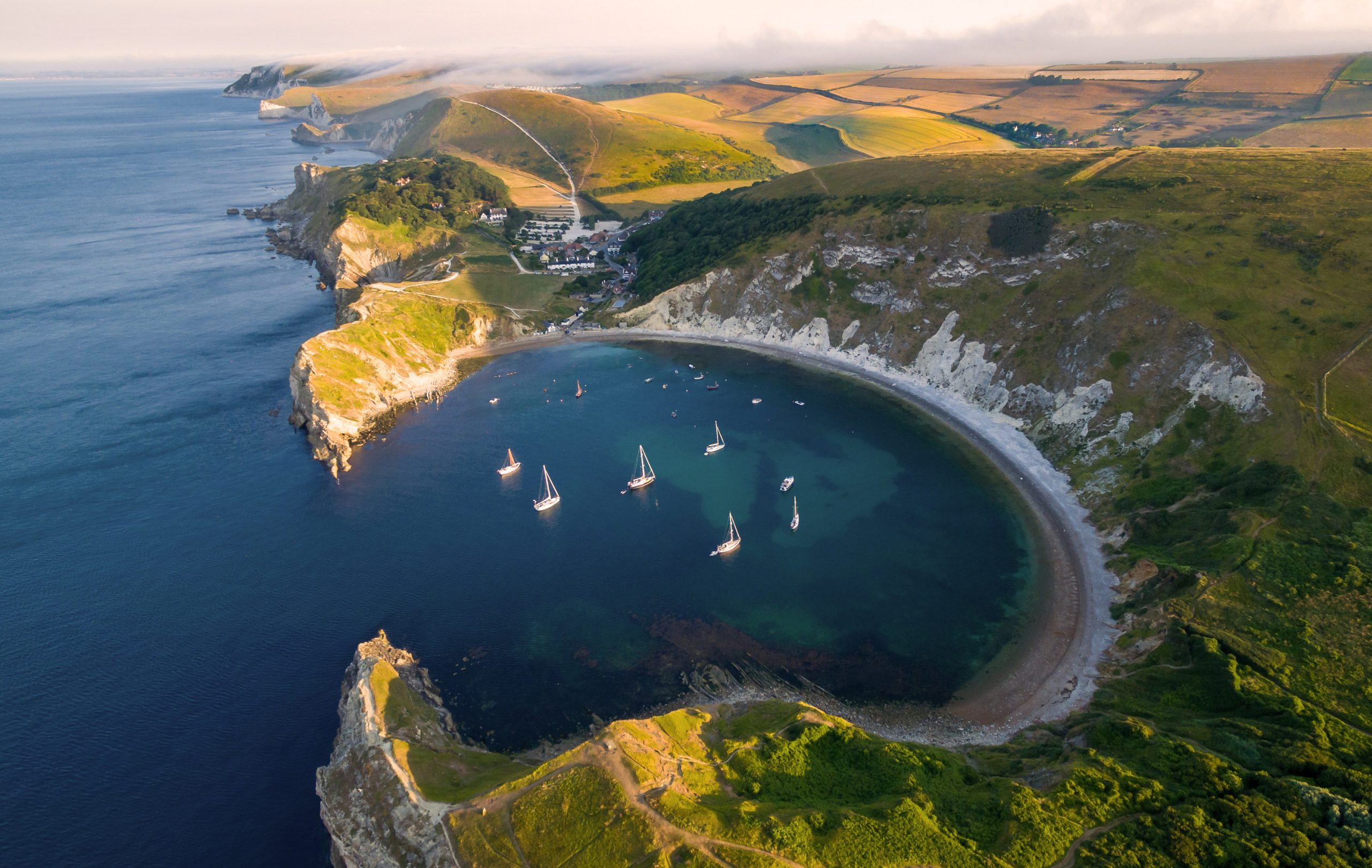 After 6 days exploring the scenic delights of the Jurassic Coast, there was one clear highlight: the lulworth cove to Durdle Door walk.

The undulating path is just over 1 mile, yet passes some of the finest scenery in the country. Below your feet, white limestone cliffs drop to golden shingle beaches and crashing oceans. Out to sea, swimmers encircle natural stone arches created by millennia of erosion. Inland, sheep and cows graze in the patchwork of green fields and rural farmhouses.

While the walk only takes 30 minutes (one way) it’s worth exploring the area further and you could easily spend a few hours or a whole day. Here’s how to see all the best bits, some tips on where to stay and information about Lulworth Cove parking.

BEFORE THE WALK – EXPLORING LULWORTH CRUMPLE

Lulworth Cove is a beautiful part of England and a great base for a weekend break in the UK. An almost perfect circular bay, the calm blue-green waters of the bay are surrounded by a sweep of grey shingle.

The view from the shore is pretty enough. Old wooden fishing boats bob up and down as day-trippers (feasting on ice cream) paddle in the gentle waves or search for strange animals in the rock pools. But it’s even better from above.

Before starting the Lulworth Cove to Durdle Door walk, head up to the small headland that sits above nearby ‘Stair Hole’ to see the full beauty of the bay from the great geological surprise of Lulworth Crumple. Layers of black, grey and white rock have folded under gravity creating a remarkable sight as they slowly melt into the crashing seas.

The loop from the Lulworth Cove car park over the headland, past the Lulworth crumple and back to the car park takes only 15 minutes (see map at end of the article) and it’s well worth inspecting before the walk.

As an excellent hike on a weekend break in the UK, the 1.25-mile walk from Lulworth Cove to Durdle Door begins out the back of the Lulworth Cove parking. A wide well-marked path slowly rises almost 400 feet to the top of the cliffs.

Over the course of the next mile the path passes secret beaches tucked into coves, cows grazing in a patchwork of fields and sheer drops that make the heartbeat a little faster. Everywhere you look the views are amazing as the rising and falling white limestone cliffs undulate into the distance. There is nowhere else quite like it.

After only 30 minutes, the walk ends at the top of the cliffs above Durdle Door. The iconic image of the Jurassic Coast, this natural arch reaches into the sea from a shimmering shingle beach. Formed by erosion of the wind and sea over millennia, on warm days it is now the playground of excited (but chilly) swimmers and awed hikers.

You could park at Durdle Door car park and do this walk in reverse, but we recommend you start at Lulworth Cove where the facilities are better. If you want to grab something for lunch, have a sneaky ice cream or a cheeky pint before you start the walk, you have options.

But, the main reason you should do the walk in the direction we suggest is due to the car park opening times. Lulworth Cove car park is open 24 hours, whereas Durdle Door car park only opens at 8am and closes at 4pm, 7pm or 10pm (depending on the time of year). This means you’re a bit restricted if you start at Durdle Door.

Additionally, the uphill part of the walk comes at the beginning if you start at Lulworth Cove, so it’s all downhill on the way home.