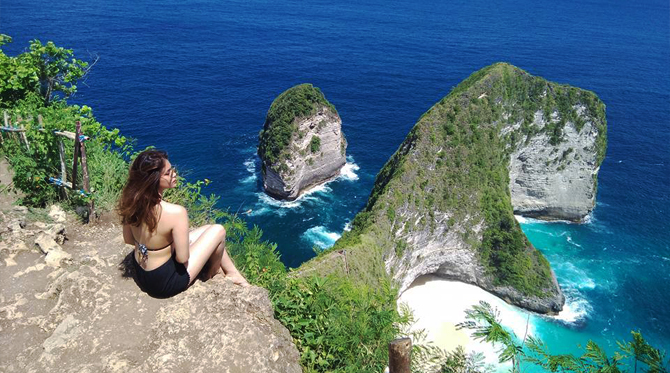 Nusa Penida is an island in Indonesian waters that is home to a ‘T-Rex’-shaped rock, a Hindu temple, waterfalls and stunning white sand beaches. The island also boasts a rugged high central region with cliffs and pinnacles.

One of the most famous landmarks on the island of Nusa Penida is the T-Rex-shaped rock at Kelingking beach. This cliff has a mystical look and is a popular hiking destination. The steep trail winds its way down to a white sand beach with turquoise water. It is a photographer’s paradise.

There are many breathtaking views to be seen on Nusa Penida. A few of them are the T-Rex-shaped rock and the Kelingking Secret Point Beach. Kelingking means “pinkie,” a reference to the smallest finger on your hand. Many visitors have come to this beautiful location because of its resemblance to the T-Rex.

It has a Hindu temple

The Hindu temple, Pura Dalem Ped, is one of the most important attractions in Nusa Penida. Founded in the 14th century, it is considered one of the holiest temples in Bali. It is the site of an annual pilgrimage by Balinese Hindus. The temple is considered to be the protector of Bali and a place of forgiveness. It is also a place to pray for prosperity and protection.

The Hindu temple is very sacred to the locals, and every Wednesday, the locals gather here to worship. The ceremony is said to bring prosperity and security to the island. This temple also contains two sculptures of the Hindu God, Indra, and Goddess Saraswati. It is not permitted to perform any personal acts in this temple, such as urination while standing.

Nusa Penida has waterfall tours that are fun for the whole family. You can climb steep stairs and enjoy dramatic ocean views from the top of a waterfall. You can also take a relaxing swim in the waterfalls. If you want to go on a longer tour, consider spending some time on the island’s other attractions.

After a long hike, you can cool off in one of the man-made pools on Nusa Penida. The pools are fed by natural spring water from the mountains and overlook the ocean below. It’s the perfect way to recover from your trek.

If you’re on Nusa Penida as a tourist, there are a number of great beaches you can explore. While many of these beaches are easily accessible, others can be difficult to reach, depending on the location. In addition to the many beaches, Nusa Penida also has many locations that offer beautiful views of the sunset. One of the most beautiful sunset spots is the Amok sunset bar and restaurant, located on Nusa Penida’s west coast.

If you’re looking for a more peaceful beach, head to Crystal Bay. This beach is a peaceful stretch of white sand surrounded by rugged scrubby outcrops. Besides swimming in the clear waters, you can also enjoy snorkeling in the nearby waters. This area is home to many giant Sun fish that measure up to three metres in length. Banner fishes, which are similar to butterfly fishes, also clean them here.

You may be surprised to know that the island of Nusa Penida has a number of dazzling beachfront bluffs. The area around Saren Cliff Point is especially beautiful and attracts many tourists, especially during dusk and night. Despite the cliffs, the island does offer a number of other activities and sights.

Banah Beach is a good example of this. The cliffs here are literally carved into the sea, with a huge hole in the middle, formed by the force of the waves crashing against them. The limestone cliffs here are lined with plants, which contrast beautifully with the blue of the ocean.

Located in the north of the island, Nusa Penida has many attractions for visitors. One of these is the Goa Giri Putri Cave Temple, which is located near the Sekumpul Waterfall. The caves are accessible via boat from the town of Penida. The cave is home to a 2.5 meter high Buddha statue and bell-shaped stupas. This temple is considered sacred and is a perfect place for meditation.

Another popular attraction is the Bat Cave, also known as Pura Goa Giri Putri. The cave is only half a kilometer long, but it has high rock ceilings. It is also home to a Hindu temple that is open to visitors. Visitors need to pay a small donation at the temple before entering the cave.